SPOTLIGHT OF THE WEEK

Conrad Odell is one of this week's senior in the spotlight. He is the son of David and Ginger Odell. Conrad is 17 years old and was born on the 15th of April, 2003. Conrad is the oldest of four Odell children with Ethan, Ross, and Glynis Odell. Conrad plans on going to college for carpentry and residential electricity. Conrad is active in football, power-lifting, shooting sports, choir, band, also  attends Abundant Grace youth group, and  First Baptist Church Boise City.
One of Conrad's favorite childhood memories is spending time at the coffee shop drinking a hot cup of joe with the older guys, just talking about farming stuff. Some of Conrad's future plans are to settle down and live a simple life, like the song “Simple Man” by Lynyrd Skynyrd. Some goals are to build his own house and shop and have a successful marriage and have kids eventually. Some advice he would give the underclassmen is “Slow is smooth and smooth is fast” in the words Conrad Odell.
By Carmen Wingert 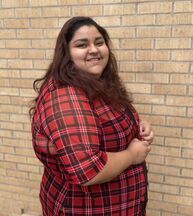 Angel Perez is a senior at Boise City High School. She was born on July 31, 2002, and the daughter or Larry and Roseanna Scott. Angel is one of six siblings including Francisco, Vicente, Omar, Sabrina, and Esberanza.   The things she cherishes the most about high school are the friends and memories made along the way. Angel values all of the friendships she has attained, they mean a lot to her. Her favorite thing about coming to school is getting to see the people she does not see often. Angel is actively involved in student council and is always at the right hand of Mrs. Born ready to help with all activities. After Angel graduates she wants to become a pediatric psychiatrist.
​By Brooklyn Wait

2020 Fall Senior Night
On October 15th before the football team faced Sharon Mutual the Boise City fall sports seniors were recognized with their parents. Sports seniors were recognized for cheerleading, softball, cross country, and football. Senior Nailea Ortega commented about the evening,“ I had mixed emotions throughout the night, it finally hit that I am a senior.” The seniors also gave meaningful advice to the younger classmen as they were recognized for their involvement with Boise City High School. Carter Crabtree, a football senior had one that attracted many laughs saying” learn the plays.” We are all grateful the seniors were able to compete and are still competing during this time.  We wish them a good rest of their senior year.
​By Adriana Rosas

The Boise City Wildcats took on the Sharon-Mutual Trojans on Thursday, October 15.  Your home team kicked the game off quickly as Francisco Ortiz and Caleb Arthaud made two quick touchdowns in the first few minutes of the game.   These quick points aroused the excitement for the Wildcats, but not for long as the Trojans regained momentum and came back with intensity scoring 22 and ending the first half with the Wildcats down 22-14. The battle continued throughout the second half, but neither team was able to punch more points into the end zone.  The game ended with each team having the same win/loss record of 1-5 going into the last half of the regular season.

Two weeks ago thecountry teams ran at Spearman, Texas. It was an early morning race with absolutely no spectators allowed.  The high school boys ran first. with Livan Rosas placing fifth, 17:50; Yahir Nieto seventh, 18:03; Jase  Stewart thirty-first, 20:51; Trenton Fulton, forty-second, 24:12; and Yerik Licea  forty-third, 28:21. Soon after the boys' race, the girls ran. Sarah Brown placing fifth, 13:34; Mariana Soto  seventh, 13:55; Viviana  Martinez,  tenth, 14:12, Nailea Ortega, eleventh, 14:15; Kaylee Woolman, sixteenth, 14:30; Jenna  Whitfield  thirty-first, 15:56; and Aimee  Torres came in thirty-sixth, 16:32. .Our Boise City Wildcats ran amazing so make sure to congratulate them!
This week cross country has been in anticipation of the regional meet on Saturday. Regional's will take place in Enid at Oklahoma Bible Academy. The top 7 teams plus top 7 individuals will qualify for the Oklahoma State Cross Country meet in Edmond.. Both the cross country girls and boys are excited to compete in Enid and hope that everyone who is available can come down and support them.
​By Sarah Brown

Official FFA ceremonies are a source of pride, identity and tradition among FFA members and chapters. This year's opening ceremony team is Jace Fowler as president, Yerik Licea as Vice president, Kelsey Broadus as secretary, Erik Ortega as treasurer, Lana Hawthorne as reporter, and Aubren Harland as the sentinel. On Tuesday October 13th, the opening ceremonies competed  in the Regional Opening Ceremonies contest in Balko, Oklahoma. They left Balko knowing that they would be going to state and were back to back first place winners. State opening and closing ceremonies were Tuesday, October 20th. They did not leave with the gold in their hands but did go for a good experience and learned a lot out of it. This year is the third year Boise City FFA has gone to state for opening and closing ceremonies.

Editorials
Historic Track Program vs. Baseball
The Boise City School Board passed a vote earlier this year letting the sport of baseball become a part of the spring semester. This brings excitement to many, but at the same time raises many obstacles. One fear of the Boise City faithful is the impact it will have on the historically successful track program. With the option of baseball during the spring, many fear that those playing will not run track or will not be as successful in the sport. While this is a valid concern, I do not believe that it will have a great effect on the track program. For the students that decide to play both sports, it would be tough, but very doable. If both sports required a mental focus and attention throughout the week, then this would be a bigger problem. However, track does not require the mental effort such as sports like football and basketball. This leaves time as the biggest obstacle. Student athletes that are successful in track are successful because of their discipline. Therefore, if an athlete decides to play both sports, he will make the practice requirements even if that means running before school. The majority of athletes that decide to play only baseball are the athletes that would still bow out of track if baseball wasn’t an option. Baseball does pose a slight risk to the track program, but that risk is not as great of the reward of the new sport.
By Caleb Arthaud
Baseball Head Coach Named
Coach Jasper Smiley has been named the new head baseball coach for the Wildcat team in 2021. This is Coach Smiley's first year at Boise City where he was brought in as an assistant football coach and teacher.  Smiley is familiar with baseball as he played in his hometown growing up. Coach Justin House and Coach Chase Lloyd have been named as assistant coaches for the  upcoming season and they are all,  " Really excited for this new program at Boise City.”   There are many things on the agenda for Coach Smiley to get this program off and running for the Spring 2021 season, not only do we have to find a venue for the sport, but also jerseys have been ordered, equipment has been priced, and he is hard at work developing a schedule for all the teams 5th through 12th grade.  There are many obstacles to overcome, but the overall attitude is exuberant as we look forward to spring.
Retirement Homes
​I believe we should have a retirement home here in Boise City or be able to go visit ones close by as a service credit for high school. With something such as this high school students would be able to be more active in the community and brighten the day of residents who may not get visitors or have families.  It would be nice to help and make them feel happy and show people care about them. A lot of elderly people are lonely in the homes and need some interaction just like we all do. You could take care of them by taking them outside on nice days, and playing games with them to keep their memory strong for as long as possible. You could help to keep their strength up. You could help change so much and improve their last days.
By Nikia Cobb